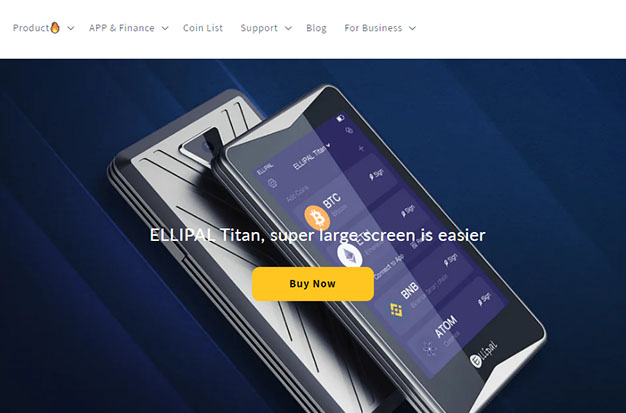 At a fair price, the Ellipal Titan is a great option for a hardware wallet. Although Ledger and Trezor appear to dominate the market, Ellipal Titan is a viable alternative that is underutilized as a cold wallet option. Here are the three main justifications for choosing Ellipal Titan as a secure cryptocurrency storage solution.

What is Ellipal Titan?

Even though Ellipal wallets are less well known than Ledger and Trezor wallets, they are still a fantastic option. They have unveiled a very robust and impenetrable hardware wallet called the Titan that resembles a tiny smartphone and comes equipped with a touchscreen and rear camera. It has a lot going for it and is ranked among our top 3 best cryptocurrency wallets in Australia. It is more affordable than the Ledger Nano X and the Trezor Model T thanks to its $139 USD price tag.

How Does Ellipal Titan Work

Setup and use are a breeze thanks to the sizable touch screen display. The Ellipal Titan displays all information clearly, in contrast to other hardware wallets with small displays and two or more buttons for operation. There is no learning curve for using the wallet; it operates just like a mobile phone app.

In my evaluation, the mobile app performed flawlessly. You can find excellent four and a half star ratings in the corresponding Apple and Google Appstores. There are additional functions in addition to the standard fundamental ones, like an account manager and the ability to manage individual coins and tokens.

How Secure Is The Ellipal Titan Wallet?

Due to the lack of awareness, I was unable to find any information during my search regarding the hardware’s security.

The lack of any physical interfaces is both the most crucial security feature and the biggest distinction from existing devices. This indicates that QR codes, rather than USB, Bluetooth, or WLAN, are used for communication between the hardware wallet and the app on your phone.

Naturally, both physical attacks and attacks on the mobile phone cannot be completely ruled out. However, this issue affects all wallet manufacturers.

Currently, only the manufacturer’s website can be used to place orders for the hardware wallet. The delivery comes straight from Hong Kong. Therefore, there are additional expenses for shipping and customs on top of the roughly 130 euros for the wallet.

Thanks to its large touchscreen and unique design, the Ellipal Titan is a stylish and cutting-edge addition to the market for crypto hardware wallets.

A close second to the number of compatible coins that the Ledger Nano X can hold is the Ellipal Titan, which can store over 10,000 different tokens. The quantity of coins is increasing because new coins are added every week. There are thousands of other coins that you have probably never even heard of before, in addition to all the well-known ones like BTC, ETH, ADA, and BNB that you would naturally expect.

The Ellipal Titan’s incompatibility with desktop computers and ability to only connect to iOS or Android-powered mobile devices is a drawback. Although it is very easy to download the app, I don’t think this is a big problem because the majority of users have an Android or iPhone anyway. The Ledger Nano X, which works with Windows, MacOS, and Linux computers, is a good option if you strongly prefer using a cryptocurrency wallet that is compatible with desktop computers.

You are undoubtedly a committed crypto investor who is worried about security if you are looking into crypto hardware wallets. As you are already aware, cold wallets are the safest option because they store your private keys offline, making it impossible for someone to steal your cryptocurrency unless they physically access your device. The Ellipal Titan goes one step further by making sure that your wallet is never Bluetooth, WiFi, or USB cable connected to any electronic device. Only the QR code on the screen and QR codes scanned with your smartphone’s camera using the wallet’s camera will allow you to connect to it. In order to provide the highest level of security, it is entirely air-gapped.

The Ellipal Titan has a tamper-resistant, tightly sealed metal case to further increase security. It will immediately delete private data once a physical breach is discovered and is impossible to open without permanently harming the device. Thus, even if your device is taken or lost, your private keys will remain safe. The Titan is impact and crush resistant and has an IP65 rating for water and dust resistance.

Since Ellipal Titan is an air-gapped cold wallet, it is safe from local and online attacks. In the event that a breach is discovered, the private data in this wallet is automatically deleted.

Ellipal provides a great hardware and software solution for storing cryptocurrencies. The wallet has an easy-to-use interface, complete airgap protection, and good design. On the Ellipal website, you can purchase metal mnemonics to increase security. In addition, Ellipal’s apps let you stake your coins, earn interest, trade, or purchase cryptocurrencies. Ellipal is thus one of the hardware wallets with the most features available.